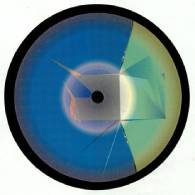 “Mourad Sliti aka DJ Mourad is a long standing veteran, since 2010 on the Minimalsoul roster. His 2015 “Tacotac” 12″ amplified his deep, diverse & funky Mediterranean production style.

Hailing from Tunisia, he was heavily influenced by the sounds of Detroit. He brought these influences to Boras, a small city not far from Gothenburg in Sweden, one of Europe’s cradles for electro music.

Electro is de facto the main stylistic focus in this “New Moon” EP, but the peculiarity of Mourad’s work goes to show how boundaryless
the genre is, as well as how he’s able to contribute in a very personal way. This is clear already by listening to the EP’s opener “La Lune”: a triumph of multiple synth layers, forged into an electro frame, with a slight UK taste, and a fistful of acidic resonance.

The track gets then a commando rework by Detroiter and Direct Beat associate Will Webb, perfect to rock dancefloors.
On the flipside, Mourad’s ode to goddess Selene continues with a very sensual and soothing track, “New Moon”, which includes an even more pronounced level of syncopation, another feature in Mourad’s production way.

The release closes with the dreamy techno tenderness that “Ten Of Pentacles” is. In 1909 the first tarot deck featuring a suit of pentacles was published, but the Pentacle or pentagram has been a magical figure throughout the 15th century and after, and in one of the most famous Grimoires of the period – the “Key Of Solomon” – there were multiple pentacles, including some linked to the moon.

Indeed the feeling that we get from this swirling of chords, claps, cymbals, bass drum and so on is that of an advice:
play your cards with honesty and courage, the powers of the moon and the stars will be with you if it’s meant to be.”